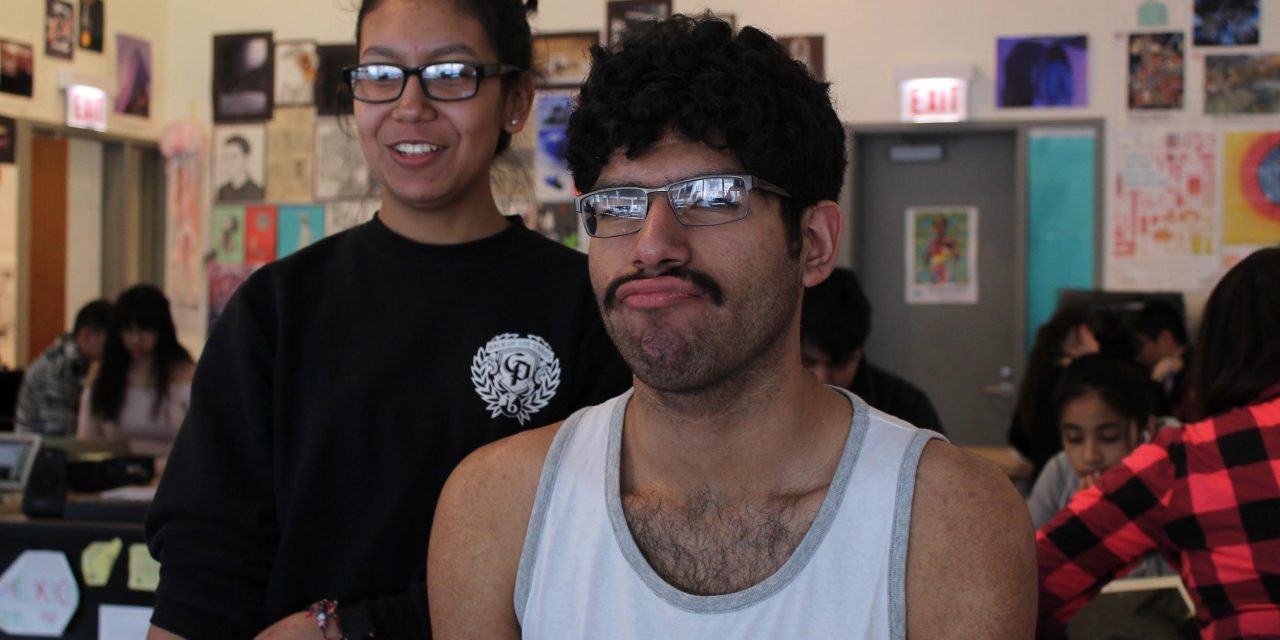 By Michelle Gongora and Ruth Orozco

Students who attend Back of the Yards College Prep High School  wake up every weekday to put on their charcoal grey dress pants with their maroon or black school polo. Even if they own a wide variety of shoe colors, they are always obligated to wear black, closed-toe shoes. Sometimes, students even decide to tuck in their shirts or wear their school IDs around their neck.

Controversy arises with the school uniform policy because there are both positives and negatives to upholding it. Both students and the people who enforce the dress code (BOYCP security guards and administration) have mixed feelings about the school uniform.

Delia Cortez is one of the many security guards who have addressed students about the uniform policy. She believes that the dress code could be worse than it actually is.

“I don’t think [dress codes] are necessary, but I do understand why most schools have them,” Cortez said. “In the city of Chicago, many schools want to make sure they can identify students versus regular people in the street.”

Alejandro Garcia, a junior at BOYCP, also believes that dress codes are unnecessary, because the only thing they do is make the school look more professional.

“I feel that our school’s dress code isn’t the strictest, but it definitely isn’t the most lenient,” Garcia said. “We should just disregard the dress code, as students feel better about themselves and work better without uniforms. [However,] dress codes might also allow some students who might not want to express themselves with certain clothes to not feel left out.”

During the winter season, the school dress code is especially tough to follow because of the snow, and students wear snow boots that often do not follow the black shoes policy. With this, students are required to switch between their snow boots and school shoes, which bothers many students.

Among the students who agree that this is an issue is BOYCP senior Nanci Lopez. However, Lopez also believes there are also pros to the school’s policy about wearing uniforms.

“I do think that [uniforms] are necessary, especially [for] jobs. Recently, I got a job at Wrigley Field, which requires a uniform,” Lopez said. “So I think it is an important lesson to learn in high school that there will be times when you have to dress a certain way when you are in certain places.”

To some extent, wearing a uniform means not having to worry about what to wear every day, as Bianney Hernandez, a junior at BOYCP, put it. Hernandez also said uniforms are helpful in regards to providing safety for everyone at BOYCP. In fact, BOYCP’s assistant principal, Jesus Laurel, adds to this fact by saying, “It’s more of a safety issue when students wear certain colors, and that way we don’t have students distracted or feeling unsafe.”

Laurel adds that parents in the community of BOYCP played a major role in deciding the school’s uniform policy, as they had a voice in what they thought was safest for the students. “I really respect the decisions that the parents [made by] thinking of safety, which is the number one reason for a school uniform.”

There are different perspectives when it comes to how administration and security enforce the school’s uniform policy between female and male students. For example,  Arturo Ballesteros, a BOYCP junior, believes that security targets female students most of the time, especially when it comes to sleeveless tops during the summertime.

“I don’t necessarily see a problem with sleeveless tops, but it’s mostly a female problem, which is unfortunate,” Ballesteros said.

Lopez believes the contrary, saying that security mostly targets male students due to the fact that they tend to wear hoodies — which are not a part of the school uniform policy — and therefore get called out more in the hallways.

Laurel, however, agrees with Ballesteros that generally school dress codes have targeted females more than males. “There have been instances in schools where females are called out more than males — there’s history of that,” Laurel said. “[Although] in our school, the pant-polo expectation is the same for everybody, which drives away from that general reaction.”

Regardless of the different views on BOYCP’s school dress code, Lopez believes both sides have valid points.

“I think it’s important for students to remember that it is easy to complain about uniform policies — I know I’ve done it — but there’s going to be pros and cons to both sides. It is important to remember to look at both sides, instead of just complaining.”